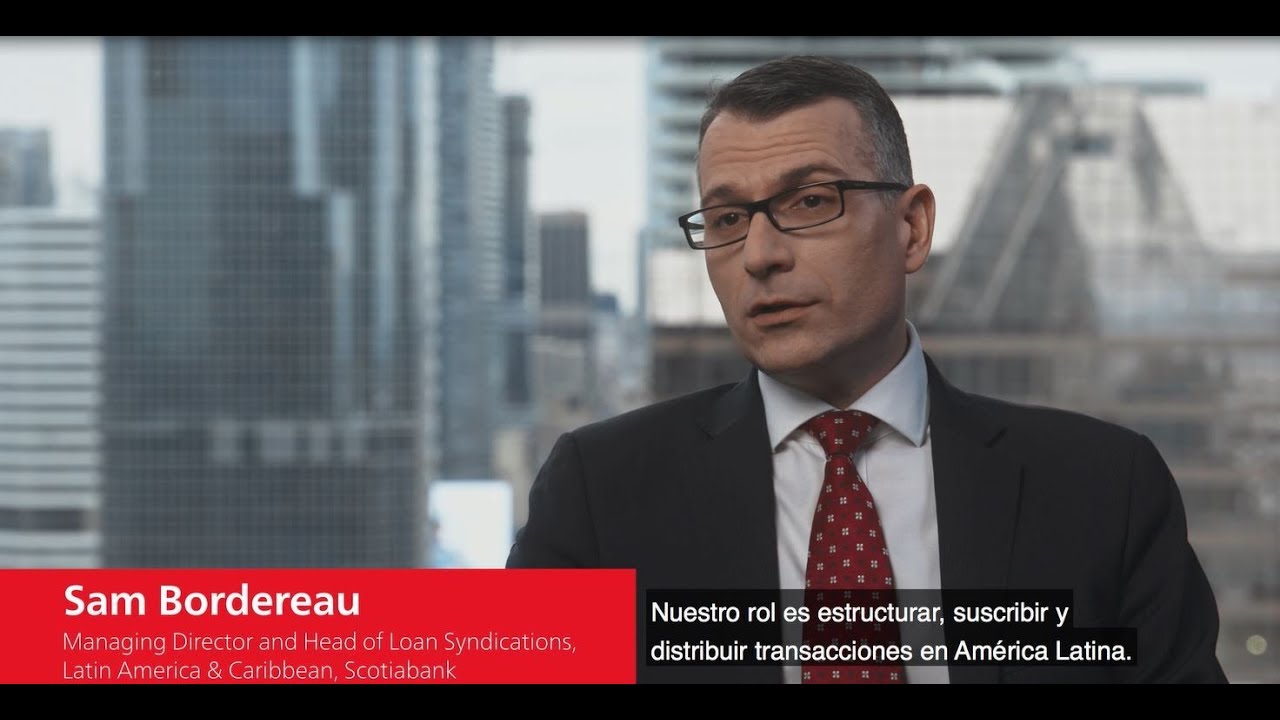 with an optional subtitle
Watch Video

As investment in mining and infrastructure continue to strengthen in Latin America, along with forecasts of growing M&A activity in the region, Scotiabank is looking to maintain that leadership. That means drawing on the combination of deep connections and knowledge in local Latin American loan markets, joined with its presence in major global financial centres.

Propelled to the top

In the past year that one-two combination has propelled Scotiabank to the top position in Bloomberg’s Latin America Syndicated Loan Bookrunner League Tables for 2017 1 . This was up from its ninth position the previous year, with a corresponding increase in market share to 10.1% from 4.6% in 2016. The total value of syndicated loans in 2017 was US$2.90 billion.

That performance was anchored by strong relationships in the Pacific Alliance economies of Mexico, Peru, Colombia and Chile. Scotiabank has made a strategic priority of the Pacific Alliance nations, where investment has been strong in infrastructure, energy, mining, telecommunications and utilities. But the bank has been building its presence in Latin America and the Caribbean countries since the 1880s with nearly 35,000 employees living and working in Central and Latin America.

“Having on-the-ground teams in the region differentiates Scotiabank," says Sam Bordereau, Managing Director and Head of Global Loan Syndications, Latin America and Caribbean for Scotiabank. "We cover the large corporate and middle market areas, and have the ability to lend both in US Dollars and in local currency. By providing full-service, we can be a one-stop bank for many of our clients.”

One of Scotiabank’s significant transactions for 2017 was a syndicated loan for the acquisition by Mexico’s Grupo Industrial Saltillo of Spanish-based Grupo Infun, an auto parts business with facilities in Europe and China. The transaction was valued over US$326 million – Scotiabank was a joint bookrunner with two other banks. That acquisition was recognized as the 2017 Bonds & Loans Latin America Syndicated Loan Deal of the Year2.

“We cover the large corporate and middle market areas, and have the ability to lend both in US dollars and in local currency. We provide full service and can be a one-stop bank for many of our clients.”

Another milestone was an acquisition of telecommunications tower infrastructure in Peru and Chile, financed in a combination of currencies. Digital Bridge’s Andean Tower Partners acquired Torres Unidas in a transaction conducted in Peru’s and Chile’s local currencies and through bridge financing in US dollars. Both transactions were syndicated in their respective countries. Divided into three tranches, all underwritten by Scotiabank, the transactions totalled $330 million Peruvian Soles, $80.7 billion Chilean Pesos, and $58.7 million US dollars.

“Scotiabank has developed very strong relationships with local, regional, and international banks," says Bordereau. “We have over 50 institutions we regularly work with in the region – and those relationships are strengthened when we invest in local currency. Most of the LatAm Loan Syndications teams of other banks are in New York, and we talk to them on a daily basis.”

Syndicated loans have helped fuel expansion for businesses in Latin America while providing insulation from exchange-rate volatility. Now borrower confidence in these products is growing at a steady, healthy rate.

Bordereau credits Scotiabank's success to the local teams, which create loans from foreign lenders that are uniquely structured for local projects. This also helps the bank find the right partners for the right investments, while being highly attuned to risk levels and factors which can affect the quality of syndication when a loan is being structured.

Being able to tightly control factors in the creation of loans means that risk can be distributed intelligently while maintaining flexibility in structure or pricing in case of market moves.

Scotiabank builds long-term relationships with the corporate issuers it covers in the region and having Scotiabank as an anchored investor in a company’s capital structure provides confidence to other banks invited to join the syndicate. “Banks are looking for transactions which comply with their requirements. It is our job to structure a transaction properly for them to clear when we distribute them. We need to maintain some flexibility with the transactions we propose,” says Bordereau.

For 2018, Scotiabank remains strategically focused on the Pacific Alliance but Bordereau also sees growth potential in Brazil and Central America, where the bank has teams in Costa Rica, Panama and El Salvador. He also sees potential in the Caribbean.

“Last year we led two syndicated deals in the Dominican Republic, including for the acquisition of six airports by the French Consortium VINCI. We led both on the bond side and the loan, for a total value of over US$500 million. We also financed a port corporation for US$150 million, syndicated to local and regional banks,” said Bordereau. This expansion into the rest of the region has given him confidence that Scotiabank will continue to have a prominent presence in acquisition financing in that region of the world.

"The past few years have been strong for M&A activity, which is good news for the syndication market because strategic investors need certainty of funds to finance those acquisitions. That means that these companies will continue to need financing from trusted banks.”

To learn more about Scotiabank's expertise in loan structuring, underwriting and distribution in both investment grade and leveraged loan markets, please contact:

Infrastructure, Power and Utilities: Driving growth in the Pacific Alliance

Investment banking in the Pacific Alliance: The importance of expertise

View Content Investment banking in the Pacific Alliance: The importance of expertise